Carpenter ants are hymenopterous insects, generally black or red depending on the species, sometimes tinged with brown, the size of which varies from 6 to 12 mm. They live mainly in the trunks of dead trees but it is not uncommon to find them inside homes. Their presence is not without risk because they can weaken the wooden structures of the house such as the frame.

In the spring, it is the mating period.

This takes place in full flight, which is why, from the month of May, we can see swarms of flying ants moving in the sky. Let’s find out a little more about the life of these insects 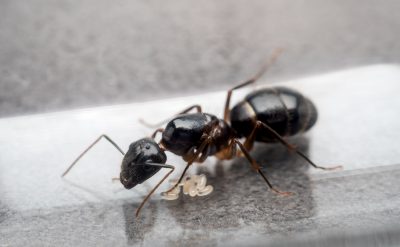 What is their way of life?

They are insects that live in hierarchical society . Each colony consists of males, sterile workers and future queens, each with a well-defined role. In the natural environment, their preferred habitat is damp rotting wood in which they dig galleries. As soon as they find ideal conditions inside houses (humidity, rotting of wood), they settle there and cause irreversible damage. Indeed, they weaken the wooden structures that they dig. This is why it is essential to carry out the extermination of carpenter ants

With the arrival of spring, queens carpenter ants wake up and venture outside their nest to mate. These flying ants , also called winged queens, are fertilized by males in flight. This is what we call “the nuptial flight” . Only females survive this mating. After shedding their wings, they look for a place to lay their eggs and y establish their new colony . Ten days later larvae hatch, then transform in nymphs inside of their cocoon . Later, satellite colonies are dug by the workers to extend the territory of the queen of the carpenter ants.

These insects are omnivorous. They feed, not on wood as one might think, but on honeydew, produced by aphids, small insects and fruits . Inside homes, they love sweet products and foods containing protein (plant and animal). This is why it is important not to leave leftover food within reach.

Where can they be found ?

The places frequently invaded by ants are:

In a general way, these insects look for any trace of moisture wherever she is. Be careful, their presence can reveal water damage!
But how do they get inside homes? There are several causes for this.

Unlike termites, carpenter ants are not xylophagous . They do not digest the cellulose in wood. If they dig the beams, it is only to find refuge there. We can see the presence of small piles of sawdust near the anthills.

They can be useful and play an ecological role . They are a link in the food chain because they eat small harmful insects. On the other hand, they are the prey of many insectivorous birds. They ensure the decomposition of dead wood and stumps.

The little white balls that they move are not the eggs of carpenter ants, as is often said. These are, in fact, the cocoons of the nymphs . Carpenter ant eggs are much smaller and difficult to see with the naked eye.

If you think you have a carpenter ants infestation, call a team of extermination experts carpenter ants . They will put their skills and experience at your disposal to get rid of these annoying insects.

Related article: How to survive an ant invasion